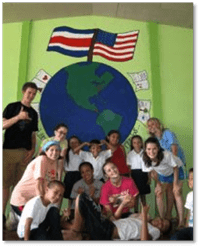 Molly Alden started her career in Costa Rica just over 10 years ago. For the first three years she worked as a teacher at the bilingual CATIE Escuela InterAmericana in Turrialba. When not teaching her students she traveled throughout Central America and would lead student group with her husband John Rabenau. John’s time in Costa Rica began with various types of student groups. John also worked as a principle general guide for various high-end adventure travel companies that catered to family vacation itineraries, couples & small group trips to Costa Rica. Together they now run Costa Rica Explorations & Costa Rica Escapes.

Based on an intricate and very personal system of homestay relationships & service project development in select Costa Rican communities, Costa Rica Explorations has evolved into one of the most unique, experiential, out-of-the-classroom experiences offered for middle school & high school students. Life-long bonds between Tico homestay families & their “Gringo hijos” are created and still nurtured today. In 2012, CRE was fortunate enough to realize a long-time dream, and took their program one step further by reversing the exchange by organizing and hosting a group of Tico students to travel & live with peers in Park City, Utah, the hometown of CRE’s US-based office.

This was a question that Co-Founder and Program Director, Molly Alden was asked on numerous occasions in the past by former students from CATIE’s Escuela InterAmericana. From this question the dream to bring Tico students to Costa Rica was born. The idea to create an authentic, student exchange between North American students and Tico students of the same age is the direction CRE always wanted to take its program,. The initial goal with CRE’s first Inter Cambio program was to have a host family from Park City, Utah welcome a Tico student/peer of similar or same age in January to their Park City home. Then in the summer, the same exchange would happen in Turrialba Costa Rica with the Tico family. While this wasn’t necessarily an original idea, it was not something that had been done very often in Costa Rica. The question now was where to start. 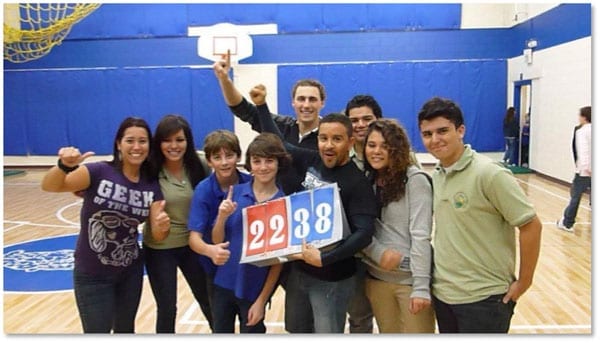 At first there always seemed to be something in the way; mainly, the fact that US visas for Ticos were expensive & difficult to get. After various attempts to collaborate, in 2011 CRE finally partnered with a local high school, Liceo Experimental Bilingue de Turrialba. (LEBT). LEBT had participated in an exchange with a school from Mexico in the past. While the experience was nice for the kids there were some administrative issues and they educators of LEBT really wanted to take their kids to an English speaking country where they could practice the language, gain unique life experiences, and share in a different culture & way of life.

On Wednesday, February 1, 2012, at 5:02 pm a group of 8 students and 2 teachers from LEBT touched down at Salt Lake City International Airport to begin their 12-day Costa Rica Exploration in Park City, Utah! The other Co-Founder, John Rabenau & Molly were there to greet the group and transfer them east up into the snowy mountains to the town of Park City, Utah where they would stay for almost two weeks. On the 35-minute transfer from the airport the students experienced two things that most of them had never before – snow & below freezing temperatures.

As the bus crossed through the capital city of Salt Lake City on I-80 and entered the mouth of Paley’s Canyon the group began to quiet down as their attention began to focus outside on the surrounding winter scenery. After all, we were going to a world-class ski town that averages about 350 inches of snow / year. To the Tico students, it was something out of a movie; the dessert-like & mountainous conditions of Northern Utah make for an eerie environment. When covered in snow or better yet, snowing, as it was during the ride, the conditions are even stranger. 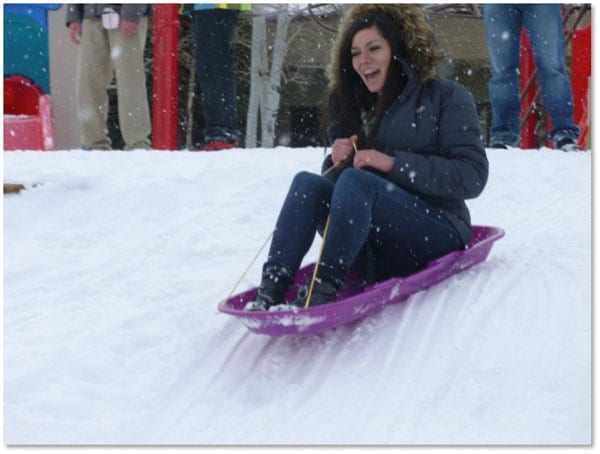 A Day in the Life on an Inter-Cambio

Upon arrival, the group went directly to their partner school of Park City Day School. When the bus stopped and the door opened a blast of frigid air shot through the bus. Before the group even grabbed their bags, everyone filed to the exit to step outside and put their hand on the snow to satisfy their natural, initial curiosity. A few of them sat in it, and a brave soul even grabbed the nearby sled and rode down the little hill in the parking lot to see what this white stuff was all about. Once this urge had been satisfied, the group grabbed luggage and went inside of the school with chattering teeth. Inside there was a welcome dinner in the schools’ gymnasium. As they walked past (and over) the piles of gloves, boots, down coats, snow pants & tukes that were left at the entrance, they all stared wondering why these clothing were there, perhaps wondering why it hadn’t been filed away neatly in the “cuarta de pila”.

The beginning of the welcome dinner is a nervous time for everyone. Homestay families wonder things like: will (s)he like my food? Does (s)he speak English? Will I understand him/her? While students wonder: will I like their food? Does (s)he speak Spanish? Will I understand them? Do they have a Wii? With great excitement and even a few tears of joy, CRE announced the first inaugural Turrialba / Park City student exchange! Both sides made formal introductions as the homestays welcome their new Tico sons & daughters. A casual group dinner of pizza followed. After dinner a pre-arranged winter clothing swap was executed for the Ticos, and a basketball game ensued. By the end of the evening the nervousness was subdued and replaced with excitement and positive energy as the families headed “home” for their first night in the homestay. 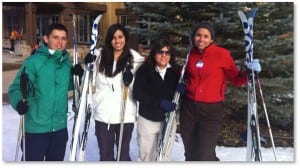 Over the next 11 days the Tico students participated in numerous activities both at Park City Day School and within the community of Park City. The inaugural group of Tico students also prepared a series of typical dances & music of which they performed various timed for schools in the Park City district. Not only did they come prepared with a typical Costa Rican dance, but they also changed costumes to do an amazing Salsa performance. One of the teachers from LEBT was a dance instructor at the school and had the group very well prepared.

During the week each morning, the group of Ticos would met at the Park City Day School each morning where they integrate into classes. They took time to visit each class and even helped with Spanish classes. They learned about the history of Park City with a visit to the History museum and one morning they took a trip to visit the high school to understand what it is like to be a high school student in Park City. The group of Ticos worked with the Park City Day School to create a beautiful & creative art project highlighting culture and their visit to Park City. This project was pre-planned by CRE with the LEBT & PCDS teachers, and it still remains on the walls of the hallway today.

Highlights from the program are many. As it turns out, the group is in Park City during two very important sporting events. The second Sunday of the experience is the first Sunday in February, which is always Super Bowl Sunday! All of the students and homestay families gather at one of the family’s house for a good-ole fashioned, catered Super Bowl Party, complete a backyard snow-football game for the kids.

The second event could be considered a cultural activity for the people of Park City. On the first Saturday night, day #2, the group met at the base of Deer Valley’s Snow Park Lodge to be part of a very unique & high-energy World Cup event. Instructions were to come prepared for a cold night. Family by family people were dropped off and collected by CRE. Once everyone was together the group began to climb out onto the snow to the top of the bunny slopes of the Deer Valley Ski Resort where the finals of the Freestyle World Cup Aerial event was taking place. The CRE group of Ticos was accompanied by about 1,000 other spectators and winter sport enthusiasts who where there to take in this magnificent ski event under the lights and on the snow. 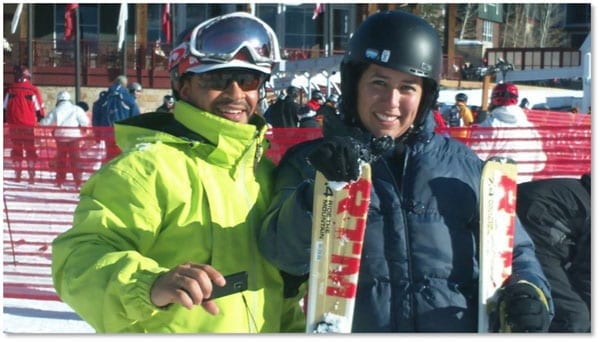 Another highlight for many of the Ticos was the downhill ski lessons at Park City Mountain Resort. PCMR is another top 5-ski resort in North America that the Ticos get to visit during their stay. This time they will be trying the sport of skiing! Lessons, lift tickets & rental equipment were generously donated by the Power Corp. family, who are also part of the Park City Day School community, and a homestay family for CRE. Everyone was given a professional ½ day lessons under a beautiful bluebird day at this incredible resort. After lunch at PayDay Lodge, the Park City Day School kids meet up with their Tico peers and given the chance to take a few runs together.

This group was also able learn how to cross-country ski by taking a lesson one afternoon with White Pine Touring. They went tubing, toured the SLC Capitol Building and even went bowling! The action was non-stop!

How can I send my child on this Student Exchange to the US?

The program continues strong today as CRE is in its third year of Inter Cambio programs with LEBT. January 28 – February 5, 2014 will be the dates for this year’s experience. CRE always posts updates for these trip on their Facebook page and they are always recruiting new teachers and educators in Costa Rica that are interested and organized enough to host one of these unique exchange programs with CRE. In addition to Park City, there are countless other towns, cities and communities that are willing to work with a school and participate this unique cultural, learning experience. Feel free to contact John or Molly to learn more about bringing a group to Costa Rica or the United States!

Molly has 10+ years of experience as a classroom teacher and service-learning coordinator planning student trips to Costa Rica, and has lived and worked in Costa Rica for over 15 years. In 2006, she fulfilled a dream of hers and co-founded Costa Rica Explorations, an authentic cultural-immersion, service-based educational student travel program, that continues to be one of the most respected and trusted High School and Middle School student programs offered within Costa Rica.