Costa Rica is a small country geographically; however, there are many interesting facts about this country. It is a very rich country in culture, history, food, and much more. This makes it unique. Even though Costa Rica is popularly known for its forests and white sand beaches, there are other interesting characteristics you may want to know about the country before you visit. 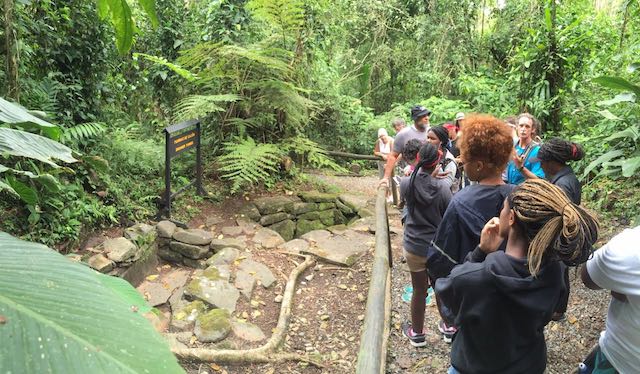 Diversity is a word that can be used to describe Costa Rica. As you travel from one region to another you can find differences in the way people speak and how they eat. The culture has been enriched with the different influences in one or another city, on what each region produces, which shapes the way they eat and the labor they do. Below you will find the most important facts that can be used to describe this country.

Costa Rica has been an independent Republic since 1921. It shares its borders with Nicaragua to the North and Panama to the South. It is also bordered by the Caribbean Sea to the east and the Pacific Ocean to the west.

The dominant religion is Roman Catholicism; however, there are a variety of other religions that are practiced. 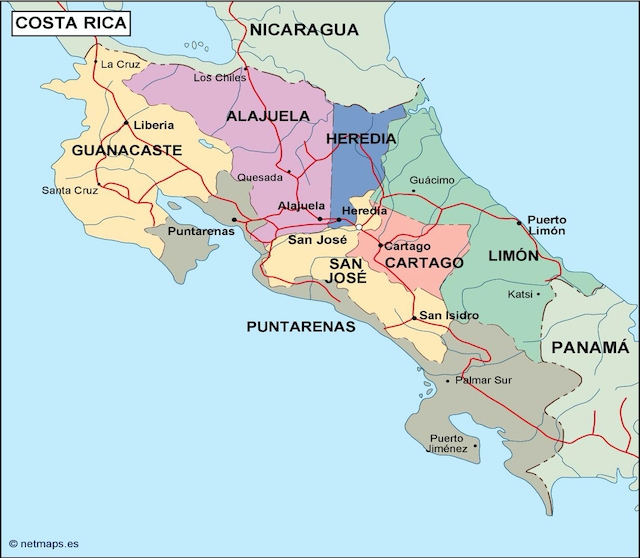 Costa Rica is divided into provinces. Provinces are like states in the United States of America. The seven provinces unite the country. The country’s capital is the city of San José, which is also the name of one of the provinces and is located in the heart of the territory. The other provinces are Alajuela, Cartago, Heredia, Guanacaste, Puntarenas, and Limón. The last three provinces are coastal areas.

Spanish is the main language spoken throughout the country, but on the Caribbean side, you can find that they speak Caribbean Creole due to the influence of the Caribbean Islands such as Jamaica on this side of the country.

Costa Rica’s population is around 5 million people and most of them are concentrated in the capital city, San José, where more businesses are located.

Size of the country

Geographically speaking the size of Costa Rica’s mainland is very small, it is just 19,714 square miles, similar to the state of West Virginia in the United States. But Costa Rica’s sea surface is 221,189 square miles, which means Costa Rica is 92% more sea than land. Due to this interesting fact, the sea surface of Costa Rica shares sea borders with Colombia and Ecuador, even though they seem far away on a map. What does having that amount of ocean represent to Costa Rica? It represents an opportunity to take care of it and also take care of all the animals that live there. 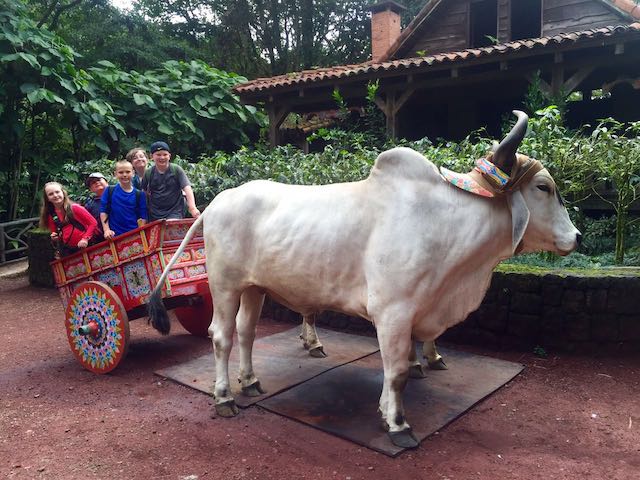 Costa Rican national symbols are a way to represent the culture through images, animals, or other historic ways that identifies the country.

What are Costa Ricans known for?

Besides being called Costa Ricans, there is another common and popular way to call people from Costa Rica, ticos (“Tico” for men and “tica” for women). They are called “ticos” because there is a tendency to use diminutive words.

For example, cat in Spanish is: “gato”, but the diminutive form used in Costa Rica would be “gatico”. Using the term tico or tica to refer to people from Costa Rica is not offensive; it is very commonly used and people from other Spanish-speaking countries call them this. Feel free to call them “ticos” when you visit Costa Rica.

Despite being a very small country, Costa Rica has around 5% of the world’s biodiversity. Different types of species of plants and animals can be found, more than 500,000. 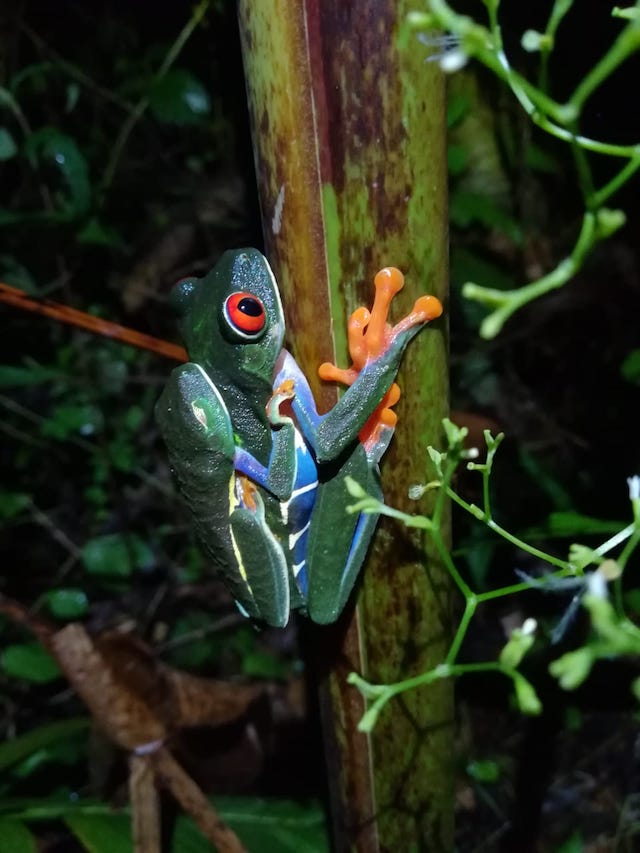 Even though the world’s biodiversity is decreasing and is in danger each day, in Costa Rica they are trying to protect the flora and fauna in the national parks. They also do a wonderful job making their citizens and visitors aware of the importance of protecting and preserving the wildlife that exists in the country. 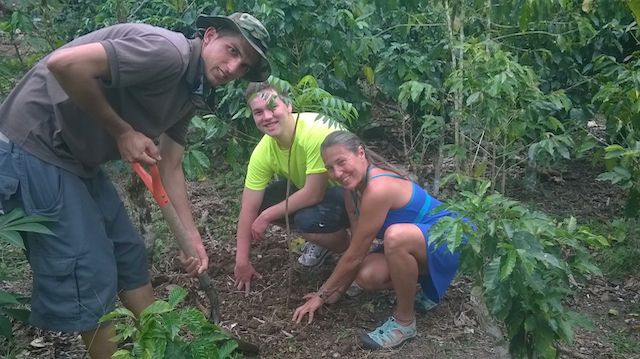 The high amount of biodiversity is due to various reasons. One reason is due to the geographic position of the country as it is located in the middle of the continent. That means that more sun is received throughout the year and that the habitats can be preserved.

Altitude and climate are two other important factors. Costa Rica has a very varied geography, from mountains to plains. That means that there are a lot of microclimates, you can be in a hot place, such as near the coast, and just a 30 minute drive away you can be on top of a mountain breathing much cooler air. That is a great opportunity for many different plants and animals to feel comfortable.

December 1, 2020 will mark the 72nd year since Costa Rica has abolished its army. The funds the country used to maintain its army were reallocated and are used to fulfill other needs within the country such as health care, education and infrastructure. What is it like to live in a country without an army? It is a culture of peace, where dialogue is the way to solve problems. Police officers do exist, however, in Costa Rica, and they are the ones in charge of controlling and avoiding illegal behaviors.

The first inhabitants to Costa Rica were the indigenous groups. They are divided by geographical areas and today there are 8 distinct indigenous groups: Bribris, Borucas, Cabécares, Chorotegas, Huetares, Malekus, Ngäbe, and Térrabas. They are distributed in approximately 24 territories and speak around 6 indigenous languages. 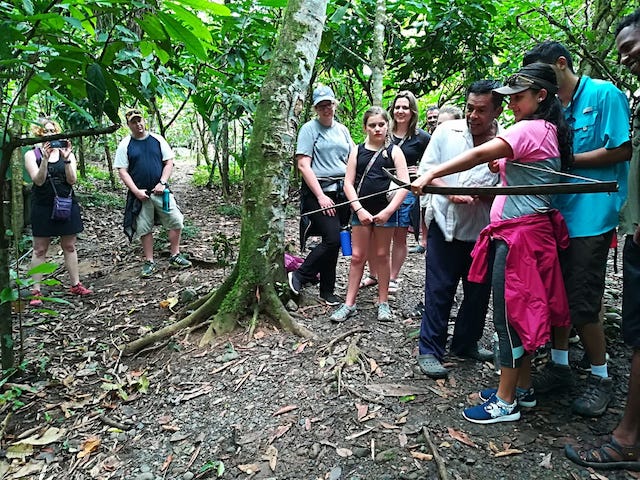 When referring to history and culture indigenous groups are very important to Costa Rica, they have enriched the culture throughout the years and have an interesting vision of the world.

Due to Costa Rica’s position in the middle of the continent, it makes it a bridge that connects the South with the North, that’s why many animals when moving from one place to another, move through Costa Rica or Costa Rica’s oceans in different seasons of the year. That’s why they created a Biological Corridor in different parts of the country as a conservation strategy. Actually there are 44 Biological Corridors that connect different areas of the country.

There is a lot of interesting information and traditions you can learn from Costa Rica. Even though it is a small country, you can be aware that there are a lot more secrets that this land has to offer. From ancestral culture many years ago to the new technologies used to become a greener world. You can learn about many different interesting and enriching topics when you visit the land of the “Ticos”.

She is part of different voluntary projects in and out of her community mainly with ecological projects.

She loves hiking, sports, adventure activities, and when she is not on the mainland, you can find her diving.